The FFCH have purchased a Sara Stedy to be kept in the x-ray department at FCH. This mobility aid is providing assistance for patients who are able to support their own weight to stand but have difficulty walking. It enables the radiographers to transfer patients from a wheelchair to the x-ray table more easily, and gives the patient the confidence to be able to assist with this.

On Wednesday 16 July Jill Sadler and Peter Humphreys were interviewed by the "That's Solent" TV channel where the objectives of FFCH were discussed.

At the AGM, the existing trustees were returned unopposed and Stephen Kirby and Peter Humphreys were then accepted as additional trustees.

The Annual General Meeting is being called for Thursday 25 June 2015 commencing at 6.30 pm and is to be held in the foyer of the Fareham Community Hospital.

There is a capacity limit of 65 persons and if any "Friend of Fareham Community Hospital" wishes to attend the AGM please e-mail your intention to foffch10@gmail.com. To become a "Friend" and support the work we do please complete the membership form available on this website.

Two new services for people with dementia and their carers have been set up at the Fareham Community Hospital, thanks to the Alzheimer's Society:

The services are based at Fareham Community Hospital, Brook Lane, Sarisbury, Fareham SO31 7DQ.

The Dementia Service offers confidential advice and wide-ranging information on services available, and is open every Monday from 9 am to 5 pm. To make an appointment, contact Kellyn Weir on 07707 89089107707 890891, or email kellyn.weir@alzheimers.org.uk

People with dementia and their carers will also be able to visit the Support Group on Monday afternoons, from 1-3 pm from Monday, March 2nd onwards. The group offers support and friendship. There's no need to pre-book, just drop in to enjoy tea, coffee and a chat.

Although we have campaigned for a local bus service to be inaugurated from Warsash village which would stop in Brook Lane at or near the Hospital, we have been advised that it is impractical to operate such a service.

Bus services are available a short walk away from the hospital, turn left out of the hospital entrance and walk for about 5 minutes to the Park Gate ESSO service station traffic island intersection. Bus stops are provided at the left side of the island for travel in both directions.

The Hospital's Opening Ceremony was conducted by HRH The Princess Royal on 21 October 2010. 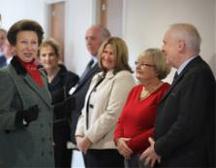 In September 2011 the Friends of Fareham Community Hospital, FFCH, became a registered charity with the UK Charity Commission, ref No 1144072.

The first principle objective has been for the Friends' Volunteers to provide a Meet & Greet Service in the foyer and man some of the specific telephone answering services.

In summary the Friends and their Supporters have provided during 2010-14 :

In case people haven't heard, the Hospital has been awarded the Fareham Society's 2012 Design Award for Best New Build.

We have attended many Community Action Team, CAT, meetings in the Fareham Borough to advertise the Hospital and its services and what we the FFCH do. We have a mobile display of services and our activities which has been on show around the community, and reports have appeared in a number of Fareham Borough's leaflets and journals.

We displayed information about the Hospital and the Friends' activities at the Warsash Festival in July 2013.

As mentioned earlier, we are trying to encourage Fareham Borough Council to authorise a bus service that will travel from Warsash to Park Gate via Brook Lane that will stop at the Hospital and also the Brook Lane Surgery. We hope Community Action Fareham will help with this objective.

Having encouraged through our multitude of acquaintances the establishment of a Red Cross depot within the Hospital building, we hope it will be set up by end of 2015.

In 2013 there was a relocation of the Locks Heath Locks Road GP Surgery to a wing of the Hospital, operating on several days in the week.

Newsletters about FFCH's activities are being published six-monthly and distributed widely throughout the community. Newsletter No 7 includes an update of the health services provided by the Hospital.

Community Action Fareham and Gosport Voluntary Action are setting up a Health Forum for the Fareham and Gosport area, to provide an effective way for voluntary organisations and the Clinical Commissioning Groups to exchange information and to ensure that the many health-related community groups have an input to the CCGs.

On 30th May 2014 we had over 70 Friends at the Titchfield Festival Theatre for the Shakespearian comedy "As You Like It". The ticket sales @ £7 are being put towards purchases of equipment for the Hospital.

On 26th June 2014 we held our Friends AGM at the Hospital. Over 70 people attended, a record ! After the main business was finished we heard from Dr McFarlane of the Fareham & Gosport CCG about plans for future community health services in our area, and what he called "Building a bright future for FCH".

The Pain Clinic was held at FCH earlier in 2014 but has been moved to Crofton Community Centre. Access to that has to be via one's GP. Hearing Aid repairs can be done at FCH on Mondays & Wednesdays.

More Workshops on local developments and the future of FCH were held in December and January and will be reported on this website shortly.