Festive Spirits - the Christmas Coffee Morning for the Volunteers. 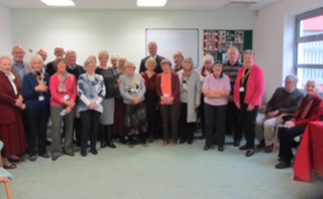 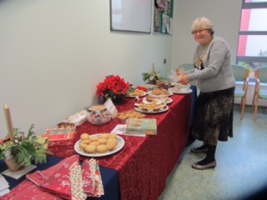 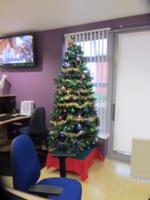 The discussion held at the hospital on Thursday 24 November entitle  "Love Your Bones" was excellent.  Matron of Osteoarthritis and Back Pain at QA, Colin Beevoir, supported by Margaret Fletcher, presented compelling arguments as to why we should look after our bones from youth to old age in order to prevent bone decay as we get older. Colin has provided additional information which can be accessed from our links and downloads pages.

We have created a list of all the Blood Test Centres in the Fareham catchment area. For details follow the link - Blood testing

A Tea and Bubbly afternoon was held at the home of Mrs Jones on the afternoon of Thursday 4 July, making over £600.00 for the FFCH funds. The partygoers were entertained by the Solent Sound Chorus, a ladies Barbershop group and an excellent selection of food was provided.

The second discussion was on Thursday 27 October, entitled "The work at the Haven for Breast Cancer Support"

The fourth discussion is on Thursday 26 January 2017, entitled "Finding Practical Support for Care at Home."

All discussions start at 7.30 and include refreshments. Tickets are £7 per discussion and are obtainable from the Treasurer on 07968 096 054.

The AGM was held at the Fareham Community Hospital on Tuesday 28 June 2016. The existing Trustees were re-elected by a block vote. Additionally Mrs Petta Dillaway was proposed as a new Trustee and voted in.

The meeting was well attended and a discussion on the future direction of integrated health support was also held.

In this financial year FFCH have purchased several items to support the staff and patients at the hospital:

People with dementia can now access services in a building specially geared to their needs after Fareham Community Hospital was awarded Dementia Friendly status.

NHS organisations and volunteers have teamed up to make the state-of-the-art hospital easier to use and navigate for dementia patients by making a series of minor changes to the building and its facilities.

The hospital is the first in the Fareham and Gosport Clinical Commissioning Group (CCG) area to achieve Dementia Friendly status, which is awarded by the Alzheimer’s Society.

The CCG has funded a weekly Memory Group to allow dementia patients and their carers to meet informally and have a cuppa in the relaxed surroundings of the hospital.

This successful and informal drop-in session is run jointly by Alzheimer’s Society Volunteers and Friends of Fareham Community Hospital volunteers every Monday afternoon from 1-3pm.

Sue Clarke, of Fareham and Gosport and South Eastern Hampshire Clinical Commissioning Groups, who chaired the project steering group, said: “We know patients appreciate the services offered and it’s very pleasing to know that the environment has been improved with their needs in mind.

“We would like to thank all our partners who were united in their support of this project, including the Friends of Fareham Community Hospital, the Alzheimer’s Society, Solent Community Solutions and NHS Property Services. Everyone was so willing and ready to support the process with such a can-do approach.”

Modifications to the hospital included altering areas such as signage, wayfinding, texture,colour and design considerations.

For example, bathroom furniture was changed to provide colour contrasts, to avoid visual disturbance for patients. Opportunities to make further improvements when facilities need replacing were also identified for areas such as flooring, where existing materials can be confusing and disorientating.

Training and awareness for staff, volunteers and contractors was also crucial to ensure the needs of patients are recognised and catered for.

The implementation project was led by Rachael Samain, a Service Delivery Manager for NHS Property Services, which manages the site on behalf owners Solent Community Solutions and Community Health Partnerships (CHP), which has the head lease.

Rachael said: “It’s great to know that this wonderful facility is now even easier for people with dementia to access – everyone involved in the project is really proud of achieving Dementia Friendly status.”

The award was made by officials from Hampshire Dementia Action Alliance. Stephen Kirby of The Friends of Fareham Community Hospital said: “Being a part of the group that was involved in achieving Dementia Friendly status, plus continuing to support the weekly Memory Group, is an example of how the Friends organisation works with the hospital.”

Property Manager Karen Andrew, of Solent Community Solutions, said: “Close partnership working with staff at the site, the Friends of Fareham Community Hospital and the NHS has made this project a great success. It has been a real demonstration of what an organisation with a strong Corporate Social Responsibility can achieve.”

James Bawn, Area Director of CHP, added: “Feedback has been extremely positive and the experience and expertise gained at Fareham gives us a great foundation to work from as we look to extend the service to other community hospitals in the area.”

The hospital also provides a Dementia Advice Service: which is open Mondays from 9am-5 pm. For an appointment, contact Kirsty Samson on 07707 890 891, or email kirsty.samson@alzheimers.org.uk

Fareham Community hospital was opened in May 2010. The £10.5million development brings together a wide range of community health services from various locations within the Borough of Fareham.